HRH The Prince of Wales visits Green Fuels and GFR 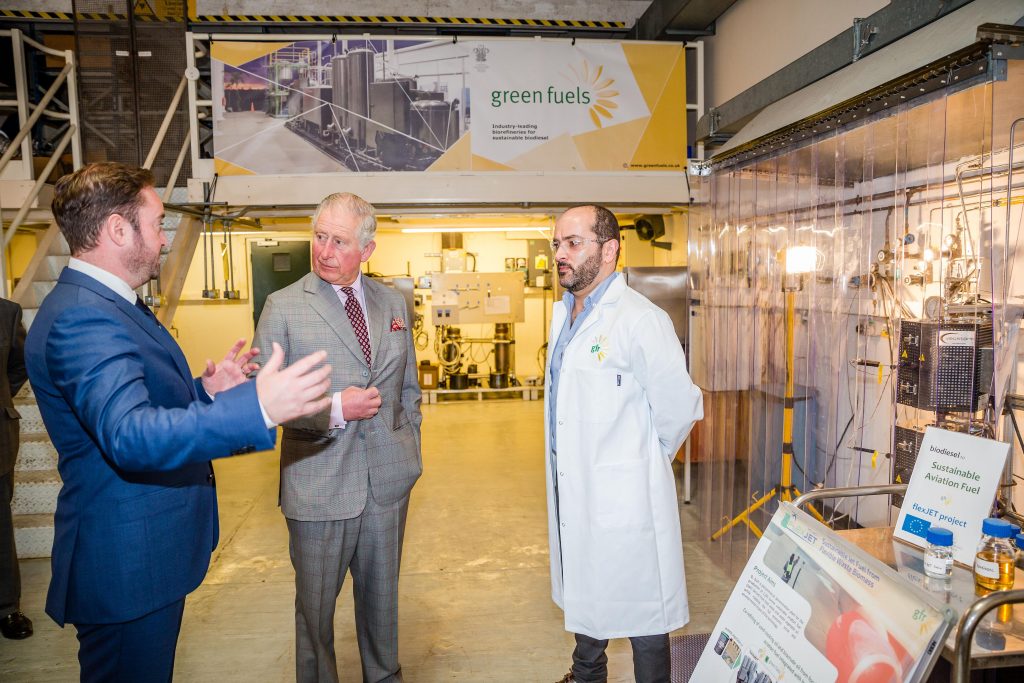 Green Fuels was honoured to receive a visit by His Royal Highness The Prince of Wales on Monday 17th December 2018. As a long-term supplier of biofuel and biofuel related equipment to His Royal Highness, Green Fuels was granted a Royal Warrant of Appointment in 2013. The fuel supplied is used in The Prince’s Aston Martin, the first classic Aston Martin to be converted to run on ‘Green Fuel’, and the Royal Train, which was first operated on waste derived biodiesel in 2007; along with other vehicles.

During the visit Mr James Hygate provided a briefing on the company’s manufacturing, production and research activities, highlighting key projects.

The Prince also heard about Green Fuels’ sustainable biofuel project in Brazil where, with support from the FCO, Green Fuels’ is establishing a localised waste to biofuel project that can be replicated throughout Latin America. “This is an ambitious project that includes reforestation of degraded pasture land and urban waste collection,” said Julian Beach, Business Development Director at Green Fuels. The project is the first stage in a scheme in the southeast region of the Brazilian state of Minas Gerais that will eventually be a £200 million project with the reforestation of 300,000 acres of degraded land, and involving at least 46 municipalities.

The visit moved onto the renewable fuel laboratories to learn of projects currently underway at Green Fuels Research (GFR). His Royal Highness saw waste being converted into Sustainable Aviation Fuel (SAF) through GFR’s SABR process. This process is a key component of Project Flexjet which will initially establish a waste to SAF demonstration facility in Germany supplying the airlines such as BA. “The Prince was shown the potential impact of SAF in decarbonising aviation and heard how the UK was leading the way in the processing of waste in this game-changing field” said Dr Sergio Lima, Senior Research Scientist. Project Flexjet has been part funded by the European Union with the aim to catalyse the production of SAF within Europe.

XWe use cookies on our website to give you the most relevant experience by remembering your preferences and repeat visits. By clicking “Accept”, you consent to the use of ALL the cookies. In case of sale of your personal information, you may opt out by using the link Do not sell my personal information. Read MoreAcceptRejectCookie settings
Manage consent

This website uses cookies to improve your experience while you navigate through the website. Out of these cookies, the cookies that are categorized as necessary are stored on your browser as they are essential for the working of basic functionalities of the website. We also use third-party cookies that help us analyze and understand how you use this website. These cookies will be stored in your browser only with your consent. You also have the option to opt-out of these cookies. But opting out of some of these cookies may have an effect on your browsing experience.
Necessary Always Enabled
Necessary cookies are absolutely essential for the website to function properly. These cookies ensure basic functionalities and security features of the website, anonymously.
Functional
Functional cookies help to perform certain functionalities like sharing the content of the website on social media platforms, collect feedbacks, and other third-party features.
Performance
Performance cookies are used to understand and analyze the key performance indexes of the website which helps in delivering a better user experience for the visitors.
Analytics
Analytical cookies are used to understand how visitors interact with the website. These cookies help provide information on metrics the number of visitors, bounce rate, traffic source, etc.
Advertisement
Advertisement cookies are used to provide visitors with relevant ads and marketing campaigns. These cookies track visitors across websites and collect information to provide customized ads.
Others
Other uncategorized cookies are those that are being analyzed and have not been classified into a category as yet.
Save & Accept
Powered by